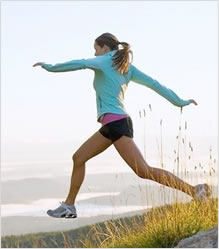 The founders and developers of Celt Naturals Immuno-Care®, Alan Fergusson and Jack Davidson, have always had a personal interest in healthy living, maintaining a nutritious diet, exercising regularly, and having a spiritual component in their lives to appreciate the beauty around them.

Alan Fergusson, Founder of Celt Naturals, Calgary, Canada, was a downhill skier for most of his life and an avid proponent of living a healthy lifestyle, having spent many years hiking in back country. He participated in 5 and 8K races and ran on most days to keep fit. Originally developed for Alan, the ingredients in Immuno-Care® have been shown to have a remarkable capacity to alleviate many symptoms related to immune system disorders, such as fibromyalgia, psoriasis, asthma, chronic fatigue syndrome, and rheumatoid arthritis, as well as many allergies, the common cold and flu.

Jack Davidson, Co-Founder of Celt Naturals, is an avid long-distance runner of many years.  He has participated in marathons, enjoys cross-country skiing, and participates in most outdoor sports. Jack’s personal interest in health and nutritional supplements began decades ago, when he utilised various supplements for the maintenance of good health and overall wellness.

What is unique about this story? Jack and Alan discovered that people with multiple personalities had symptoms that occurred, and then disappeared, along with their personality changes. This led them to believe that a psychological/spiritual component to healing and peace of mind is just as important as a healthy diet, regular exercise, and quality nutritional supplements. Unfortunately, the psychological and spiritual aspects of our lives are often ignored, perhaps because this may involve a difficult internal journey.

With the ever-increasing number of viruses, and their ability to mutate at a much faster rate than in the past, it has become increasingly important to maintain a strong immune system. Celt Naturals Immuno-Care® is an all-natural daily supplement that supports and maintains a healthy immune system.

While Immuno-Care® was originally developed to assist with serious illness, Celt Naturals emphasizes that it is not a cure.  However, it is a natural and effective immune system regulator that can help you “stack the odds”.  The philosophy of Celt Naturals is that dealing with any health issue is a matter of trying to change the odds in your favour by accessing available resources, whether traditional, alternative, physical or spiritual. It all begins with taking control. While the road of natural and alternative treatments has been much less travelled than that of conventional approaches, more and more people believe a natural approach to healing is an option well worth exploring.  It is incredible how many people facing serious illnesses show signs of improvement when they become proactive and take control of their own health.